This is a first article about this beautiful Japanese piece of engineering. Don’t forget to check the second one, where I did a more technically orientated review on it’s circuitry, history and included some basic measurements.

I was quite worried when this unit arrived in such a bad shape. Both cosmetically and mechanically. Actually it might be worst so far. Quick overview of a front panel revealed a lot of issues. I even had to contact the owner to make sure, that all those defects were not inflicted upon shipping.

On/off switch was broken, meter range knob was missing and all this filth everywhere wasn’t the worse issue as there was obvious signs that this unit had a major impact on it’s face plate. You must drop it straight on the corner to bend 4mm aluminum so bad. I have no idea how people manage to do stuff like that.

Inside condition wasn’t promising either. In case you were wondering – yes, that’s speaker output terminals this spring was sitting on. Presumably it fell of from broken meter range push button. All boards were covered in a thick layer of junk made from dust and other garbage, that had accumulated in a past 40 years. There was also evident liquid damage near the main caps.  This needed further attention.

Now that’s what I call dry caps! And by the looks of it, magic smoke got out long time ago for a corrosion to set in like that. This should serve as an educational material for those who wonder why they should change their 40 year old equipment caps at all. All that was left to do was to turn this sucker on. Using current limiting of course. No one in their right mind would consider doing otherwise after seeing all those wonderful things. So you can imagine my amazement when it turned on and worked like that! Well, sort of. Power LED was on, but relay wasn’t engaging. So a repair investigation begins.

Obviously first thing to do is to find protection board and do a visual inspection. As is often the case, protection circuit sits on the power supply board.

Lot’s of cooking action here! Quick check confirmed that all resistors had continuity and weren’t fried. That’s what a poor thermal design and a lot of heat will do to a board over  time. Got a love that dark crust forming from unwashed soldering flux, gross… Let’s look at schematics and try to figure out what else is wrong here. 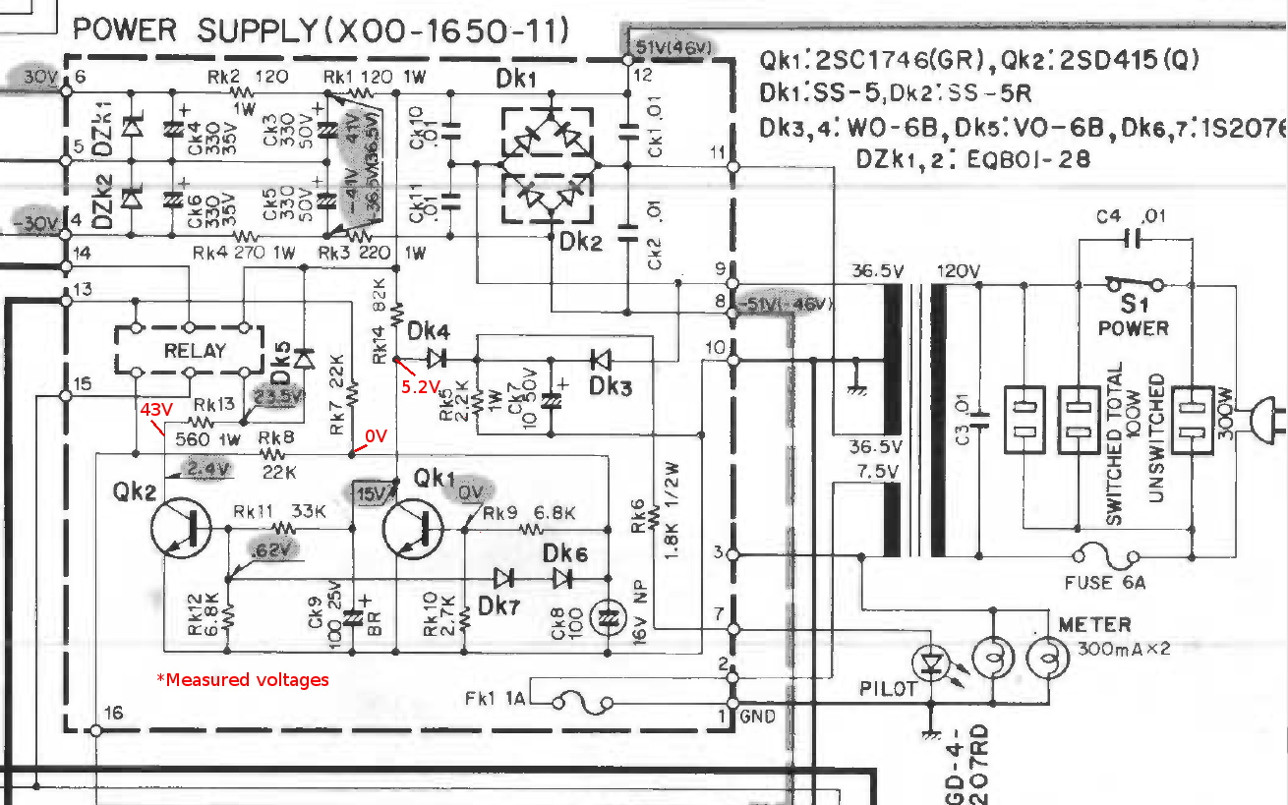 Now Dk4, Dk3 and the rest of the gang, got me head scratching. By the looks of it, this circuit function was meant to be voltage monitoring.  Dk3 charges Ck7 but Rk5 and Rk6  sinks current and keeps certain voltage level at Dk4 cathode. Dk4 anode is connected to pull-up resistor Rk14 and doesn’t allow Ck9 to charge above this voltage level plus Dk4 forward drop. If voltage drops at Dk3 AC side, as in case of over-current line sagging, Dk4 pulls Qk2 base down and disables relay.

A little bit like balancing kettle full of boiling water on your head, when standing on one leg on a big rubber ball. I mean why make these kind inherently defective circuits, which will fail from component aging ? What’s even more peculiar is why to make a LED integral part of this circuit ? It’s function should be indication, so connect it across Rk13 and let it indicate that relay is on and everything is ok. All in all it’s a bad design, I don’t like it at all. It’s got “cheap” written all over it. I understand that someone got their promotion because they managed to save 4 transistors, which could’ve been used instead of Rk2, Rk4 for ripple filters and couple more to make this protection circuit bullet proof, but still.

Measuring voltages just confirms my suspicion regarding this whole monitoring shebang. If resistors Rk11, Rk12 and Rk14 are in specs (which they were), only way that Rk14 could measure 5.2V is to Dk4 pull it there. Otherwise it should sit at ~1/3 of supply voltage, as Rk14 with Rk11 and Rk12 forms a 82k/40k voltage divider minus minuscule Qk2 base current drop. After poking around the rest of the components this happened.

Hello there Rk6, you old, inadequate and unsuitable piece of carbon resistor. You should measure 1.8kΩ, so what happened ? Life happened it says I hear… First, you were  massively underrated to 1/2W, when in fact that’s your constant power dissipation. And then you were specified as carbon type, when everybody knows that carbon resistors are notoriously unstable in high dissipation conditions. Just look at that scope shot to get the idea on how much voltage it must drop to feed that 1.8V LED. That’s on top of  about 14V DC.

I thought it was a good idea to replace all the caps at the same time and be finished with this board. Luckily, I had most of the caps in stock. After desoldering the old ones, I was in for a surprise.

Yep, cap glue. I really utterly and sincerely hate this stuff. Try cleaning this gunk after 40 years of cooking and crusting and you will know why! Yes, it has it’s purpose – to hold larger caps in place and fight against vibration, but I feel like it did more harm in a long run then good. In large part because of it’s corrosive properties that damages near by components, so it’s not entirely an aesthetic thing. Silicon grease is what should’ve been used here. Couple good  passes with strong paint thinner is needed to dissolve this stuff.

Rk6 can be safely increased to 2.2kΩ to limit it’s power dissipation to ~0.4W, then 1W thick film or wire-wound  resistor will be just fine. I tried to save bottom of this board as much as possible so some flux residue is still left there, because it was starting to come off with a soldermask. After re-flowing all board with fresh solder, it was working as new. Time to connect signal generator and check basic functionality.

Disaster strikes! Out of nowhere as always. I had checked signal path for the first time this unit was powered on and it was producing nice equal sinewaves at it’s output. And now – this is the output of a preamp.

As you can see, one channel is clipping at 6V with equal volume provided to both channels. This is a clear sign that we have an open feedback loop somewhere.  After consulting schematics and making sure that there is equal output between ICd1 and ICd2 op-amps, I managed to narrow fault down to Qd9 circuit. Time to pull out preamp board and look more closely.

Well someone had a really bad day at office it seems! First, they managed to tear off those traces when stuffing connector. Then, there is some budge wire, which could be last minute after-fought to solve some grounding issue, or they just teared that trace too. And for the dessert, ladies and gentlemen, we have a budge caps! Don’t be mistaken, there is a dedicated place for them on other side of the board. Someone just forgot to put them there. Oops.

Above is a closer look to those connector traces. You just can barely see that open trace on the utmost left pin. It’s a connection from Rd63 to VRd2-a in schematics, right at the feedback loop as I guessed it. Easy fix. I imagine that this was an intermittent fault during all life of this amp. I just hope those speakers survived this and nobody got heart attack, when suddenly one channel starts clipping out of the blue.

When checking amplifier output and making sure both channels are working, I still wasn’t totally satisfied.

There was still left ~4% difference between channels. So why don’t we fix it that we are at it. After some fiddling with pot over Rd63, and finding right parallel resistor value, this was the result.

Now that’s how it should be. I always feel that it pays off to match channels in terms of better stereo imagining. Of course, all the rest of the audio chain should be matched too, in order to benefit from it. Time to order the rest of the components.

Biggest challenge was figuring out what to do with the face-plate and missing knobs. After a lot of googling and searching online I managed to find missing parts at EW electronics. Shipping was quick, packaging was excellent and communication was instantaneous.  Even though face-plate that arrived was in worse condition then I could anticipate from photos, I still can highly recommend this e-shop for unobtanium parts.

When the rest of the parts arrived from Mouser, as always on time and without any hick-ups, it was time to get busy. This, being Level 3 restoration, means that chassis and front panel is fully disassembled and all individual parts are washed, and boards are cleaned.

Next, it’s time to start a recap process. This is pretty straight forward when everything is disassembled and access is excellent.

Don’t forget those nasty tantalum  caps. Here they’re working as signal decoupling caps without any bias voltage, so probability of failure is quite low, but it’s better be safe then sorry.

After changing those tantalum’s to nice wima film caps, it was time to go trough all the switches with deoxidizing spray and re-lube all the pots. Output IC’s got a fresh layer of thermal grease and I got to the main caps.

They were upgraded to 18000uF x 100V Cornell Dubilier units. I really respect Cornell for providing ESR values for their caps, which are 0.018Ω@20Hz and 0.014Ω@20kHz for these particular ones. That’s good, really good. It’s equivalent to a resistance of 1 meter and 1mm2  diameter wire. Even Nichicon doesn’t say anything about their premium “Gold Tune” audio grade caps ESR.

Now we are at finish line, everything just goes together and just a couple final issues to sort out.

Namely new light bulbs and a new mains wire. Also notice those factory ceramic caps going from RCA input ground to chassis ground. That’s a really nice touch rarely seen on a consumer grade electronics. It means that people designing this amp knew what they’re doing. In case you are wondering what’s their purpose – to stop RFI from getting in a case right where it should be – at the RCA socket.

Now it starts looking like an amp again. One last issue though. New power switch doesn’t fit. As can be seen from above photo, power switch shaft is different then all other switches. Hmm… time for some chopping action !

Much better now. Here goes the front-panel with all the knobs and voilà ! Patient is alive and well again.

There can be found plenty wrong with this amp, if one’s willing to search for, but you can’t deny one thing – it’s really beautiful. Classic, timeless design that will cheer it’s owner for a long time to come. Here is some more pics of this beauty.

Closeups for those circuit board aficionados ;) I know you’re out there!