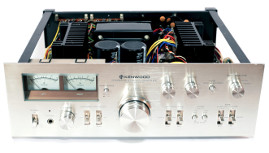 This is a second article about this beautiful Japanese piece of engineering. Be sure to check the first one, where I did the full overhaul, for more pics and not so beautiful  details!

I always had problems with sales people. I know they are “just doing their job” but I beg to differ between doing your job and putting rubbish in advertisements. We don’t have any exceptions here. “All stages direct coupled” and “Input capacitor-less pre-amplifier” it says.

Well, I don’t know how they count back there in Japan, but I counted 9 coupling caps in signal path. Not including two in a phono stage, I might add. That’s a really long way from being “Direct coupled” and “Capacitor-less”.

I should probably expand a little here regarding coupling caps. You see, in late 70’s there were starting to come out first publications on capacitor distortion and microphonics by such audio engineering grands as John Curl, Dick Marsh and Walt Jung. By then, industry started to realize that putting gazillion coupling caps in a signal path might not be such a great idea after all. To be honest, this realization still hasn’t come to the consumer level and pro audio products even to this day, as there is always “all knowing wizards” for which a cap is a cap and audio frequencies is almost DC, but anyway. This is when you see first “DC coupled” sales pitches coming in to play. It can be done, and it was done successfully in a range of hi-end products, just not here. Even Model 600 has a lot more then 1 “safety” coupling cap.

Let’s start with a power supply, which is always “make or brake” place for a class-B amps. In this unit we have a mono power supply. This means that one power transformer, rectifier and supply caps are shared between two channels. That’s a typical configuration for a mid-end product, certainly not what you would expect from a top of the line 8300. There are good technical reasons, why it’s inferior to dual-mono design and hopefully we will reveal them later in measurements section.

Power transformer seems to be adequately rated at 300W and sized for 2x80W at 8Ω outputs, but unfortunately, same can’t be said about the main caps. With just 7500 μF per rail/per channel it’s really underrated.  Rule of the thumb is at least 10000μF per rail/per channel if we are talking of any sort of hi-fi here. So, main caps should be increased to 18000 – 20000μF when doing a recap as a must. That’s as high as I would recommend, without upgrading diode rectifier bridge.

Stabilized power supply for ±30V is a joke too. With just zeners and 1W shunting resistors it looks… well, cheap! That what it is.  Again, very not top-of-the-line’ish. But hey! It does the job, as there are enough CMRR build in to powered circuits.

Nothing worth mentioning in pre-amp and tone control sections, except maybe usage of voltage-amp IC for pre-amp input.

That’s a very basic op-amp in a nutshell with extra terminals for easy equalizing circuits implementation. I would prefer discrete circuit over this all day long. Everything else – standard  stuff for that era.

For the output amp we have something more interesting – Power Amplifier IC’s!

By this time, I was really puzzled on what could make this amp worth it’s top of a range position at all. Don’t get me wrong, there are obvious technical reasons to go with output IC’s – better complementary matching, power dissipation and most importantly – price. It’s cheaper to put all circuit on one wafer substrate and call it a day. That’s what you’ll find in all modern mass consumer amps and it all started right here it seems. There is just one little problem though, if it goes puff – say goodbye to your amp as these are unabtonium now. Yes, you can find them on Ebay but don’t even bother as they all are 100% fakes and will not work. Don’t ask me how I know that.

But wait ! It’s not all lost. After some digging I found more info about this  IC. It’s seems this is just a darlington output pack with build in over-current protection.

I haven’t tried this circuit, but at first glance it’s so simple that I see no reasons why it should not work. So there is hope. It could be fairly easy replicated with modern discrete components. I would ditch Q2, Q3 over-current protection circuit though, as this is bound to have a negative sonic impact (as is circuit in original IC), but to each it’s own I guess.

That’s a really interesting comparison. One, looking at the specs, would think that KA-7300 is just under-powered 8300 version, but it’s not so simple. Yes, 7300 is rated for 2x65W  at 8Ω, that’s 15W less then it’s bigger brother, but other then that – they’re almost equal spec-wise. The fact is, 7300 is much closer to the top-end Model 600 then 8300 is. This is in a large part because they’re sharing same type of dual-mono power supply design.

This brings 7300 in front already, but when we consider that it also has 10000μF per rail/per channel main caps – it becomes no competition right there. It will have cleaner first 30W or so and produce more punch no questions asked. And it can be upgraded even further upon recap, making this no competition at all.

It uses the same darlington transistor packs for output, just rated at 80W.  This shouldn’t bring any worries, unless you are planning on driving some really heavy speakers. But then, you should probably be  looking to something else all together.

With total 7 coupling caps, it’s ahead of 8300 in being “Capacitor-less” too. All in all, it’s a much cleaner design and I like it better. It should really pay off sonic-wise, so if you’re hesitating between two – grab 7300.  Unless, of course,  you are one of those people listening with their eyes. Then 8300, with it’s mesmerizing big UV meters, might be more up your alley. Again, to each it’s own.

After every restoration I do some basic measurements to make sure equipment is conforming to it’s factory specs. It sometimes  also reveals any defects that might be still present. This is not meant to be in-depth technical analysis using state-of-the-art measurement equipment. Here goes my usual disclaimer.

Measurements are just that – measurements. They are meaningless without context. I see people to often emphasizing on numbers and graphs and I strongly advice against this over-interpretation. They don’t tell us anything about how good or bad particular peace of gear will sound, unless it’s seriously flawed. Audio reproduction chain should always be analyzed as complex system, composed of many components which may and will interact with each other. Only when there is established certain correlation, between measured data and perceived sonic properties, numbers start to make sense, and can become a powerful tool for intelligent development.

As always let’s begin with a base line measurements to figure out our noise floor.

That’s really not bad, and close to a declared 100dB. Some room still left for improvements on Left channel for better grounding.

Let’s continue by checking THD numbers for a rated power output. I tend to use 6Ω resistor for a dummy load. It’s a happy average between 4Ω and 8Ω and it saves me time and effort to make measurements for both ranges.

All in specs and still far from declared <0.1% THD. It’s a really a good place to measure dynamic cross-talk too. One channel is driving  6Ω load, while other is measured. This is where 8300 falls on it’s knees and the price you have to pay for cheaper single power supply is obvious. Only 47dB of stereo separation ! That’s ok for vinyl, as you rarely have more then 30dB from cartridge at ideal conditions anyway, but if you’re planning on listening to hi-res digital material – this amp will be serious bottle-neck. It’s not a disaster, as we all know how good vinyl can sound with even worse cross-talk, but something to watch out for.

Hmm… maybe they missed one zero when writing specs, as this is ten times better then declared 0.04%. Nice overall spectrum, with all higher harmonics below -110dB. Also notice how well channel amplitudes are matched! All the restoration efforts have paid off it seems.

Here we are looking for sharpness off that 7khz tone. The less wide “skirt”, composed of 60Hz inter-modulation products it has – the better. Again – all in specs, with a lot of headroom.

Up until now I was quite satisfied with somewhat conservative and well written specifications. And we come to the line were it says “Power Bandwidth  – 5 Hz to 40,000 Hz”.  Ouch…  The general definition of  power bandwidth is “the frequency range for which half the rated power of an audio amplifier is available at rated distortion”. That sounds simple, we just check at what frequency extremes, distortion becomes higher than rated. But it begs a question – what is a half of rated power ? Should we use minimum rated 40W or nominal 42,5W at 8Ω ? Or maybe 50W at 4Ω ? What distortion figure we should use ? THD, THD+N or maybe even IMD ? You see, it doesn’t make any sense, because it’s incomplete. It should be written as “Power Bandwidth  – 5 Hz to 40,000 Hz at 0,1% THD with 40W power in to 8Ohm load”. But the way it is now – this spec is pointless and can’t be checked.

Even though it’s not in specifications, this is one of the most important specs for amplifier. I like to measure it at different power levels and see were gain compression sets in. It gives me clear indication on power supply robustness. This time however, for some reason I saved only 1W graph (oops). So it must suffice.

All in all, this is a really nice amp. I wouldn’t put it at the top of the line, because of previously mentioned reasons, but it does the job. Overall build quality is really decent, and these  mishaps with broken traces and budge wires could be isolated to this one unit. General serviceability is good, but is somewhat limited by the availability of Output Power Modules. It has enough power and slam for all except those seriously heavy speakers and should drive everything that you through at it. I will retract my self from those murky sound descriptions and just say that it sounds easy and laid back. It lacks this sparkle and micro details, even after full recap to Nichicon audio grade caps, but on the positive side – it’s easy on your ears. I had this amp playing at my workshop for whole two days straight as a background music source and haven’t felt any fatigue. So if you find one for a reasonable price – grab it. Otherwise, it has an average bang-per-buck ratio.