In this article, I will walk you through another restoration of an classical stereo amplifier – NAD 3080. Second part is coming up with a short review and measurements.

From the first glance it was obvious that this amp was in a fairly decent condition. Cosmetically there was just a couple things wrong, like for instance black laminate was starting to peel of from wooden cover in a multiple places.

Nothing that a little bit of glue and heat-gun couldn’t solve. Also some of the knobs were loose and smeared with some kind of white paint. Other then that – it was in a pretty good nick. Just small bruises here and there, usual wear I would say.

Inside Condition and Operational Check

That’s one of the cleanest amps I have worked on. I mean, it just can’t look that good after 40 years (actually little less, as these were produced from 1978 to 1982). Either it was recently serviced or it was kept in a really dust-free environment. Any way, it’s always a pleasant surprise to NOT find any dust, spillage and cobwebs.

As is always the case in life, everything can’t be perfect all the time. Same thing here, as cap glue plague haven’t  spared this amp either. I will skip my usual rambling about this stuff by just saying – it complicate things. And it damages them too.

Let’s check basic functionality by hooking up signal generator and tracing signal along it’s path. And there is a problem straight away.

Above is a scope screenshot of a signal from the volume pot. Quite some difference between the channels. Levels would change from position to position all aver the range. This is a clear sign of potentiometer wear right there. Visual inspection didn’t reveal any signs of resistive track wear-through, in this case, there was still a chance to save it. This is a type of potentiometer with dents or positions, so what you can do is try to reposition those dents, by adjusting the end cap or some other way – depends on construction.  This way the wiper will make a contact at fresh and unused positions. But this time, to no avail. No matter what I did – levels were still all over the place. Murphy hits again.

Usually this wouldn’t be a problem, I would just order new part and change it during restoration process. But this was a double gang 100kΩ potentiometer with custom 30/70kΩ loudness tap. Not the most common thing to come by. After intensive searching online, best thing that I could come up with was this Chinese wonder. 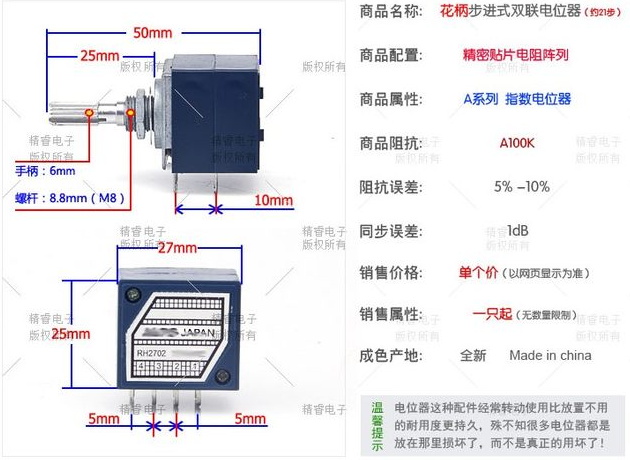 ALPS JAPAN – yeah, right…. But hey! For 10$+shipping, it’s worth a try. And it has a loudness tap too! But for the sake of me, I couldn’t find what was it’s value. It’s like some sort of military secret. Anyway, couple days of waiting and I was able to find out my self.

It’s 11.2/95kΩ. Damn. Murphy is strong with this one. Overall build quality is good and the dents had a lot of torque. So it will have this solid feeling when operated. Just no one knows for how long.

It’s a passive attenuator, not some pesky and crackly pot, so it’s an upgrade already. Inside was looking pretty good too. Reasonable soldering with no icicles or lakes of soldering flux. Contact pad’s were gold plated (don’t expect it to be more than minimum 100nm ENIG though) and had curved shape. So it will have no gaps or interruptions between positions when changing volume.

But Chinese weren’t, well Chinese, if they didn’t managed to still screw something along the way when copying this. Resistor values didn’t follow logarithmic growth, so what you have is – too little steps till the middle and ridiculously large ones, above that. If not this nonsense, I could seriously recommend it as an excellent upgrade to any amp or pre. Ok, time to solve some compatibility issues.

As we will change a loudness tap with a new pot installation, we now have a new problem to solve. Let’s first find out how much this will impact actual frequency response. This would be a fun exercise to do by hand, back in the day when this unit was engineered. Luckily we now have an abundance of simulation software and such tasks became quite trivial. Here is an old vs. new circuit schematics.

Let’s run a simulation and find out what frequency response differences we have at output nodes 4 and 9.

That’s pretty far away from what was intended by NAD engineers. It will sound too bright for sure. Let’s see what we can do about that, by fiddling with C3,C4 and R7 values.

Much better now. And here is the new circuit with resulting standard component values.

Problem solved it seems. Time to order these caps and the rest of the components for the overhaul.

First thing on the list was UV meter light bulbs. These are one of the most difficult to access light bulbs that I have encountered. Despite that they are sitting soldered inside UV meter casing, this casing is not removable as a single piece either. Whole face-plate must go away.  Have that in mind if you tackle this on your own.

I will recommend against wire desoldering, as it’s so easy to melt this plastic and damage meter by puling out contact pad.  Disassembly requires a steady hand too, as this old plastic will crack just like that.

These are burned all right. Underspeced voltage wise or too powerful it seems, as there is even an official service bulletin, stating this problem.

New bulbs go in and faceplate is cleaned. All ready for final assembly. Next in line we have an application of new thermal grease for driver and output transistors.

Not much left of it after all these years, so it’s a must for every serious maintenance project. There is much more work involved with output transistors, as they’re soldered in PCB from the other side of the heat-sink.

Don’t skip on these if you want to have a really good idle-current setting and ensure a stable operation afterwards. More on that later.

That’s a inevitable part of every restoration that I do. Access is decent here to all of boards, except tone control. It wont come out, unless you take out the drivers heat-sink. That’s not a problem if you took it out already for a reapply of a new thermal grease.

And so the never ending fight with a cap glue begins. Luckily here it was applied with reservation, so nearby components seemed to survive.

Not so lucky at the power supply area. These zeners are corroded beyond what I would consider to be safe to leave, so they are going out and new ones going in.

But why do you put this gunk under the main caps ? They have their metal bracket attached to chassis holding them in place. They are not going anywhere, unless you manage to bend a chassis by casually drooping this amp from the roof of some building. So really, why ?  This doesn’t make any sense.

New main caps had a different pitch between legs, so a slight modification to a board was required. I just hate that burned factory flux residue, clean it must be.

This amp doesn’t have usual idle current setting pots, instead it’s set by simply changing resistors. I respect this engineering decision, although it kinda worsens the serviceability. But what it gives us back, is elimination of a very common point of failure in all amplifiers. I can’t even count how many times I repaired bad idle setting pots – a lot. You are lucky, if amp is well engineered and you have a zero bias current in case of failure. This usually means a distorted channel and is an easy repair. It gets ugly when a bias circuit is such, that open pot has maximum idle current running through output transistors. This leads to a thermal runaway and puff… outputs gone.

Usually, when you have applied new thermal grease and all transistors have a good thermal connection between them again, idle current just falls in place. But not here. Measuring voltage drop at double 0.22Ω emitter resistors  gave 15.6mV. That’s a 140mA of bias current! Way too much for those skinny heat-sinks. This leads to a total of 14W constant dissipation per channel.  Let’s do something about that.

Although there is a table with suggested resistor values, I find it faster to just desolder this setting resistor and put a temporary pot in it’s place. When current is set, just desolder pot, measure it and put a new resistor. In this case, 1.8kΩ did the trick. Now we have much safer, maximum factory specified 80mA idle current.

Some Other Small Fixes

When working around bias current circuit area I have noticed that there is some heat damage.

Up in left you can see a traces of op-amp change and overheated flux residue. A little below sits 1W bias circuit resistors, with quite some dissipation it seems. Closer inspection revealed  onset of a cold  joint forming from constant thermal expansion and contraction. These joints must be re-flowed with fresh solder or imminent failure is unavoidable here. Even though it’s Level 2 restoration, were I don’t do extensive board cleaning, that flux residue looks ugly as hell. I just couldn’t leave it like that, so again – clean it must be.

This actually came out better then expected . It’s pity that new potentiometer legs pitch is different then the old one.

Assembly quality of this unit was really poor. This screw was sitting there, between heatsink and bottom plate from factory.

That’s a usual thing for 80’s “made in Taiwan” products. Some work went to just  put it back together. No further comments is required for above pictures I guess.

After fiddling with that peeled wooden case laminate and gluing it back together, this amp was ready for it’s beauty shot session.

This wasn’t a real beauty shot session without the bikini pics :)

And finally closeups for those hard-core fans!

Don’t forget that this could be your amp here, or any other piece of Hi-Fi gear for that matter. Contact me and I’ll be glad to help you out.