In this second article, I will make a small overview of the design and engineering decisions made in this particular stereo amplifier and their impact on sound quality. There is also some measurements included. Check out the first part if you are interested in more details and pictures of the restoration process.

Remember the 3020 ? That small black lunch box with few knobs that managed to become worlds “most sold” amp ? Then meet it’s bigger brother – 3080. Originally released in 1977 with NAD 30XX integrated amplifier lineup, it follows the same “less is more” ideology at the core of NAD, and is a brainchild of Bjorn Erik Edvardsen (also known as “BEE”). His aim at the time was to design a simple, affordable amplifiers with an authentic sound. With a plain cabinets and moderate power outputs, the 3000 series deliberately ignored features that were often mistakenly regarded as a sign of quality at the time (and sometimes still are today). The amplifiers still had good specs, low distortion and sophisticated technologies by that time. But first and furthermost, they were designed for actual sound characteristics and this shows up. Especially with a later released 3020. 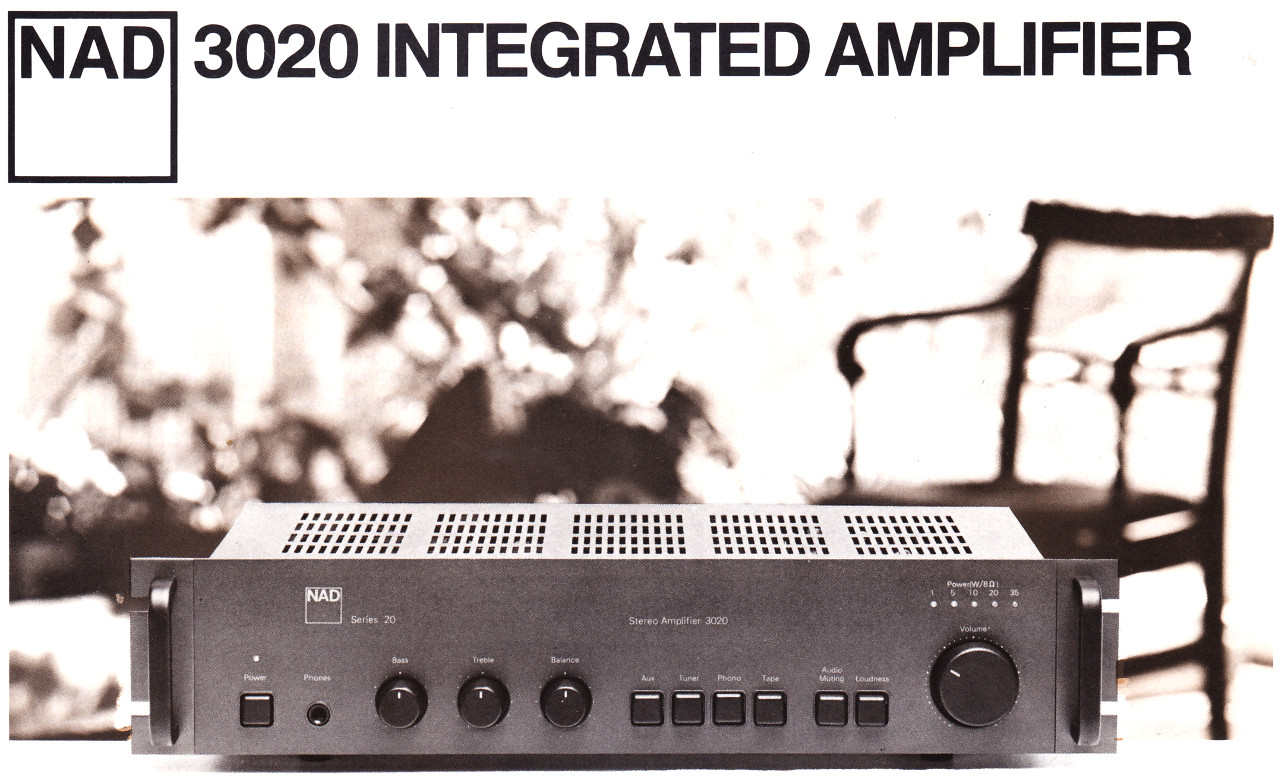 I hadn’t met single person who had a chance to listen to it on suitable speakers and wasn’t blown away by how good this 20 Watts dwarf can sound. And this pattern repeats it self over and over again in audio products. The more simpler the circuit and elegant the design – the better it sounds. Subjectively that is, and 3080 is no exception at all.

We are starting at usual place – power supply. Unfortunately here we see the conventional mono power supply design with just a 7500μF per rail/per channel.

That’s short of my rule of the thumb, which is at least 10000μF per rail/per channel, for anything more then 20 Watts power rated. Well, at least the secondary pre-amp power supply has it’s own winding with bridge rectifier and proper stabilized ripple filter.

Pre-amp has a short signal path, with a very sane 4 coupling caps and just 2 input/output buffers. Everything else that is tone control related can be safely bypassed. That’s how it should be done, but unfortunately it’s not always the case.

This simplistic approach follows the output stage design too. Don’t be intimidated by a share number of components, as most of them are there just for housekeeping.

This design is inherently hard to stabilize, so quite a few compensation caps can be seen, but let’s start from beginning. First it has an op-amp at the input. I already can hear all purists squirming in their chairs nervously and mumbling from irritation, but hear me out. If properly implemented – it can sound really good. And it was proven to be so, many times now in such amps as Quad 405 or Rega Brio to name a few. It all begins in 1972, when Texas Instruments decided to promote their op-amp lineup, and there was an article born in BritishPractical Wireless magazine, named “Texan 20+20 Watt Stero Amp”.

I have build something similar in my younger days as this is a simplicity it self. And I can tell you it doesn’t sound spectacular. It is What it is – just another kit amp. But as I latter realized, there is a trick to make it sound decent, and with enough effort – even really good. I won’t get into technical details, but the trick is to use a fast op-amp, and back in the day there was nothing faster then video op-amps.  Output and driver transistors should be fast too (have high transition frequency), as otherwise it will be a nightmare to stabilize the whole thing. So there was no wonder when I found CA3100 video op-amp at the input and 2SD287/2SB539 complimentary pair with 8MHz fT for outputs. This fact alone just shows – someone actually listened to this prior to putting it in final product. 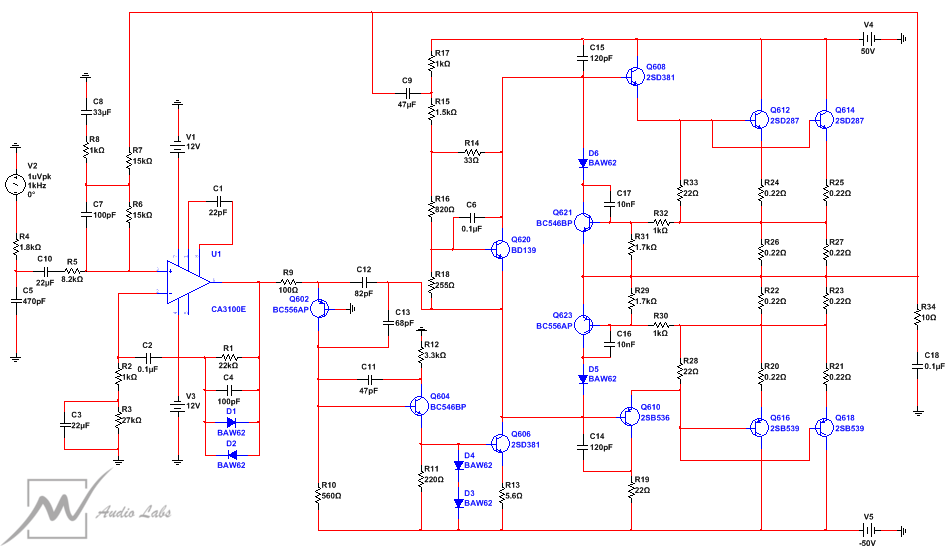 Not much going on there. We have a common base amplifier Q602, to buffer op-amp output, and emitter follower Q604, to shift a level and provide drive current for voltage amplifier Q606. Q602 also provides constant current load to op-amp output, putting it in to class-A operation, nice touch. Bias spreader is build around Q620, which sits between driver transistors Q608, Q610 and sets the idle current for output stage, which is very common double-emitter-follower type. Transistors Q621, Q623 are for current limiting and that’s all she wrote really. There is nothing unnecessary here.

Another interesting property of this design is two stage voltage amplification. First, there is input op-amp configured for some 30dB of voltage gain and has it’s own feedback loop, and then we have a usual VAS stage. This splitting helps to further linerize voltage gain. Also notice usage of nested feedback, with the taps to VAS load resistors and op-amp input – advanced stuff for the 70’s!

After every restoration I do some basic measurements to make sure equipment is conforming to it’s factory specs. It sometimes  also reveals any defects that might be still present. This is not meant to be in-depth technical analysis using state-of-the-art measurement equipment. Here goes my usual disclaimer.

Measurements are just that – measurements. They are meaningless without context. I see people to often emphasizing on numbers and graphs and I strongly advice against this over-interpretation. They don’t tell us anything about how good or bad particular peace of gear will sound, unless it’s seriously flawed. Audio reproduction chain should always be analyzed as complex system, composed of many components which may and will interact with each other. Only when there is established certain correlation, between measured data and perceived sonic properties, numbers start to make sense, and can become a powerful tool for intelligent development.

Nicely written specs, not much room left for interpretations. Apart from a slew rate, which is an obvious typo. 40V/Nsec is something that only lab grade tunnel diode pulse generators could produce. It should read 40V/μSec instead. Also such parameters as damping factor, reactive load rating and transient overload recovery time are rarely seen in other manufacturers datasheets. Not that it would help to sell amps (say transientoverloadrecoverytime one more time), but still – nice touch. Transient Intermodulation Distortion or T.I.M was a hot topic back then too.

Ok, let’s begin from noise floor measurements. This is a really good one! With mains components just peaking above -110dB. Excellent grounding and low noise engineering practices right there. I also included dynamic crass-talk to spoil a party. Another channel is driving 90W  in to 6Ω load, while current one is being measured. This spec is always terrible with mono power supply’s and here it’s even worse. Just 37dB of channel separation, ouch.

THD for right channel is little bit out of <0.03% spec, but nothing to worry about really, as we are driving heavier 6Ω load here, closer to the clipping territory.

Hear is the more relevant 1Watt to 6Ω load THD measurements. Very clean spectrum! With dominant second harmonic and no sign of higher order ones, especially 7th and 9th as these will always sound very nasty even at ridiculously low levels. Also notice how well channel levels are matched. This is one of the long list of merits when having a passive attenuation for volume control.

Intermodulation distortion is well within specs. I haven’t checked I.H.F. I.M.D., as this will surely be correct too. It’s basically the same measurement , just with higher frequency tones.

Frequency response is almost exactly as specified at -0.5dB for 20Hz-20kHz and -3dB for 5Hz-50kHz. But only for open circuit or 1W power output! Things start to get worse as soon as we start pumping current into that load. At 90W we are left with only 5Hz-5kHz at -0.5dB – good bye Hi-Fi. I haven’t further investigated the actual cause behind this, so I can’t say for sure is it dynamic gain compression from power supply sagging or circuit just runs out of gain-bandwidth product. Probably mix of both. One thing for sure though, this amp is too optimistically rated for 90W output.

This amp got my attention for sure and I quite liked it. That’s a  rare occasion these days, as I’m spoiled beyond any hope of recovery with tubes, hybrids and all sorts of other Hi-End’ish stuff. Taking deep breath in and trying to describe it’s sound – I will say it does everything right, has neutral tonal balance and lot’s of punch. There is plenty of sparkle and details but with no trace of a harshness. Not up there with musicality and sound stage I’m afraid, but hey! It’s solid state amp after-all. Don’t push it too far, and you will have really sweet 40 Watts of enjoyment. I’m a really firm believer in less-is-more ideology and this amp just again proves my point. And it measures good too! Even by today’s specifications aficionados marks.  Build quality is so-so, but that just concerns a mechanical part. Also, overall looks are probably not the strongest point here. But I have no remarks for electronics or component base, which, let’s face it, makes the actual amp and is up to the task here.

I can really recommend getting this amp, as the prices are currently in sub 100Eur range if you care to look for. Of course, don’t expect anything previously mentioned without at least full recap. It’s insane to even talk about sound nuances when listening to a 40 year old caps. If you can live with little less power, then don’t look back and go for 3020. This sweetheart can be found in the same price range too, and with little help from people like me, it will worm you even more. Happy hunting!