The Taming of the DHT

Just like a Luciantio from a similarly sounding play by one William, I just couldn’t use any DHT tubes in my projects for a long time. Not because someone had to marry first though. I just wasn’t satisfied with how easily influenced those tubes are. Like a spoiled little girls they stopped singing if anything and I mean anything was not up to their standards.

Using not the most optimal and overpriced transformer for a filament heating? Have a bad regulated mains? Filtering chokes are less then 10kg? No music for you sir! This all happens because of one thing and only – AC heating. Everybody I have ever talked to regarding DHT triodes and how to properly use them was swearing by AC heating. It’s the only way these tubes were meant to be used! They said. And having decades less experience than these greybeards I obediently followed the cult. 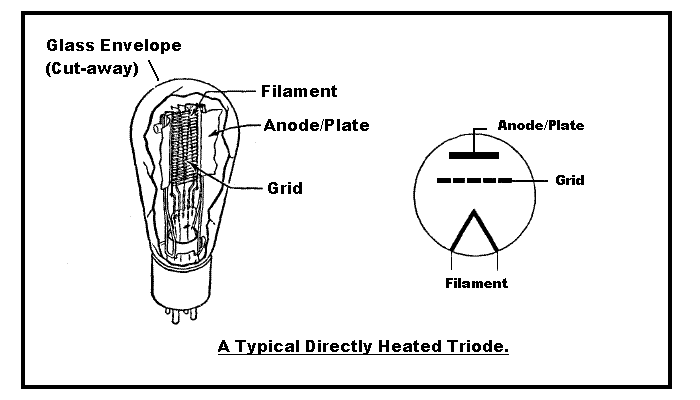 For me it never made any sense. Why? Let’s just look at the DHT symbol representation above. If you know anything about regular tubes you can spot a difference right away. Where is the cathode? There is none! Heater is the cathode and it’s called filament now. So you say my precious audio signal is going through a filament to a ground and returns back to anode? And I must now connect my filament directly to a secondary winding of a mains powered transformer? Yes sir! No thank you. That’s more or less how all of my correspondence ended every single time.

As the saying goes, one picture is worth a thousand words. Above is the illustration of what happens with your DHT gear when it’s mains powered. This is the best case scenario with DC heating. Notice that 3 leakage capacitors are in series. Last time I checked this decreases total capacitance three fold. Now delete PN capacitance, don’t use any isolation transformer and connect filament directly  to secondaries. Welcome to the High-End world of AC heating my friends! Where every power cable will sound different, your wall sockets should be gold-plated and all home mains wiring coaxial and shielded. Oh, and how are those air-lines on your outside pole doing? I hope they are tightened good enough. And this goes on and on. Why people do this to them self’s? One can just look and wonder.

But this is not how filament should work! Now because of DC voltage gradient one side of the filament is always emitting more electrons then other. You are stripping the filament and killing tubes! I hear purists screaming. You must be joking, right? Just switch the filament polarity then once in year or so. Wait, right, your tubes don’t live that long! Because if anything is killing DHT filaments than it’s turn-on surge current with AC heating. It might be 2 to 5 times nominal and is only limited by a transformer short-circuit current. I get nervous twitch in my eye every time I hear 300B amp turned on. That filament starts nicely cracking and transformer hums like crazy with cold filament acting as almost short at it’s end. Splendid. Also, ever heard that first DHT’s were battery powered? How about that inter-modulation distortion with AC heating? OK, I might stop beating a dead horse here… 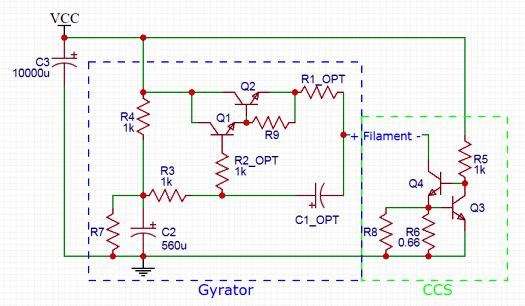 When we are talking about DC heating, we must talk about Rod Coleman also. These two are like synonyms now. At least in DIY audio circles. I remember in early 2000’s when I was actively reading/participating in diyaudio forums, he published his first filament regulator circuit and it was an instant hit. I haven’t saved that schematic as I was not taking any notes on “esoteric” stuff like DHT’s back then. Best I could google-it-out now is above schematic from tubecad blog. John Broskie does a good job at decoding the above schematics and I don’t have anything to add. But the premise for his critique is not something that I would agree with.

In his article he states “It seems to fail its major design goal, namely situating the filament between high-impedance paths to the floating power supply“. Then he goes to show “low” impedance path of 2kΩ. Now John I’m sure is good enough EE to have a clue about what impedance to expect from such a simple CCS as shown above. At typical DHT currents of 1-2 Amps it will only be some 100Ω at best. How is additional 2kΩ parallel to that gonna change anything? It’s a typical strowman argument. Then again, what is a “high” impedance in this case?  Looking from a perspective of a 1Ω filament, CCS of 100Ω is x100 higher impedance. So pretty “high” in my book. Now if I remember correctly whole sales pitch for Rod’s design was not only high impedance for the audio frequencies but also for HF. First one isolates anode current from leaking to the mains side and other keeps mains HF noise from getting inside a filament loop. That’s why he advocated transistors with lowest output capacitance Cob possible and any MOSFET’s were out of the question. So it also might be misinterpretation of design goals. Hard to tell without Rod’s response.

Next, John shows his take on the problem and proposes quite a few circuits. I’ve never tried them, but I’m sure they are well thought through and work in a general sense. Unfortunately all of them have one fatal flaw and author is very open about it: “I have been meaning to build a 300B power amplifier for years now, but have yet to find the time or the compulsion”. I call that problem “couch engineering” 🙂 If he would actually build and listen to any of those circuits I’m sure they would all fail sonically to one degree or another. How do I know that just by looking? Because I know what kills a good sounding DC heated DHT instantly. Any capacitor around filament and any feedback loops. Don’t believe me? Try it for yourself! Use a battery and simple CCS to eliminate all other variables. Now put a capacitor with a switch around filament terminals and listen to how it sounds on/off. Or even better, put LM317 regulator there and tell me how that went! I bet you’ll never want to hear a DC heated DHT again. 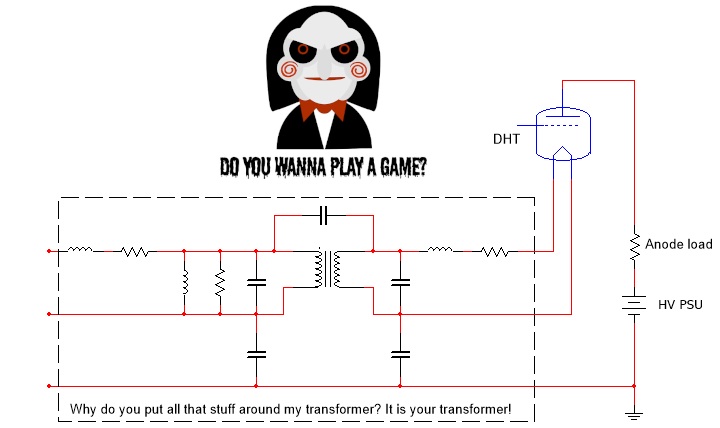 Varying anode current i.e. your music signal creates a very small AC voltage around filament resistance. If that voltage is shunted with a capacitor or some sort of feedback mechanism starts to regulate it – good by sweet sound. I don’t have a good explanation of why that happens. Nor do anyone else as far as I know. It doesn’t make a lot of sense from a vacuum tube physics perspective and it shouldn’t matter. But it does, big time. So I’m not gonna just ignore this subjective reality just because I’m afraid to discredit my self with “not following the science”. I’m sure given enough time and right equipment I would get to the bottom of it. Maybe one day. Now imagine what happens when this voltage gets into transformer secondary with AC heating. You guessed it! Almost the same thing, but even worse. Transformer secondary not only shunts filament with low impedance, but it also has leakage inductance, inter-winding, inter-layer and ground-leakage parasitic capacitance’s. All of that will form an EQ network that will degrade sound in a ways that are almost unfathomable. Now a heater power transformer must be designed with a same care and same amount of black magic as an output one. And given right amount of money and attempts I’m sure you’ll find one that sounds right for you. If that’s your game than it’s fine. But I’m not going to play it! 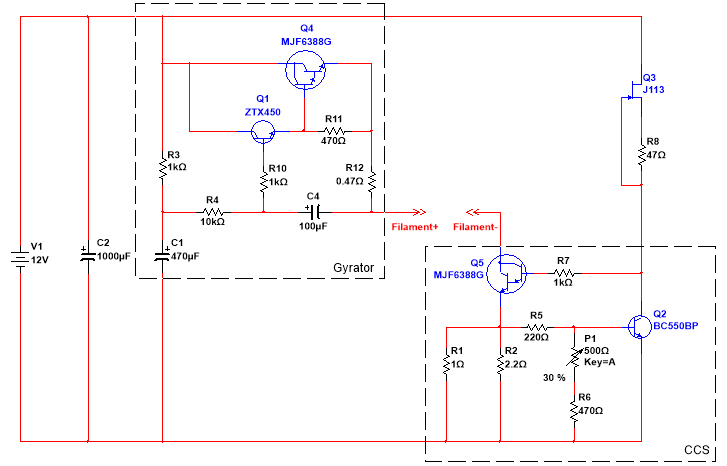 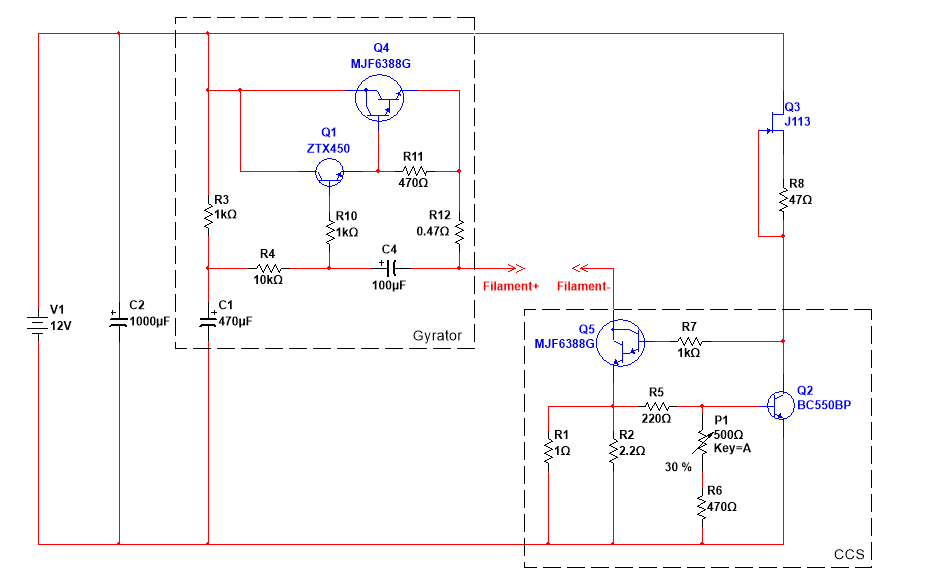 Now on to the solution. I have no idea what current version of Rod’s regulators looks like or what transistors he is using, but I bet they sound really good. Again, how can I know if I never tried them? Because he simply listens to what he builds! So if you want to just buy his kit and be done with it – I’m pretty confident you will be not disappointed. If however you want to tackle the problem yourself, above is a schematic I actually build for my 4P1L PSE amp. It’s for two 4P1L series connected filaments and you can adjust current between 1.2-1.6A. I used darlington transistors with lowest Cob I could find to maximize both impedance’s (audio and RF).  MJF6388G has isolated TO220FP package and is good up to 8-10W of dissipation. So 12V PSU at 1.3A max. If you want to crank the current up or have more voltage – then use TIP122 or NTE263.

It sounded really fine. Miles ahead anything I heard with AC heating. But then I started wondering, do we really need a high impedance in both directions? We still have to ground one side of the regulator, so filament shouldn’t care what’s in the other side of that connection. As long as we still use same low Cob transistors for HF, all should be fine. And I was correct! Eliminating that feedback capacitor and grounding positive side of the regulator improved things even further! Now I was intrigued. I know from my numerous experiments with CCS’s of all sorts and purposes, that for high current ones – I always prefer the sound of no-active-feedback. Meaning only inherent transistor-emitter-degeneration which is still a form of feedback, just not that obvious. It also means much lower impedance. But strangely it always sounded much better. And what do you know? It finally started singing like I’ve never heard before! 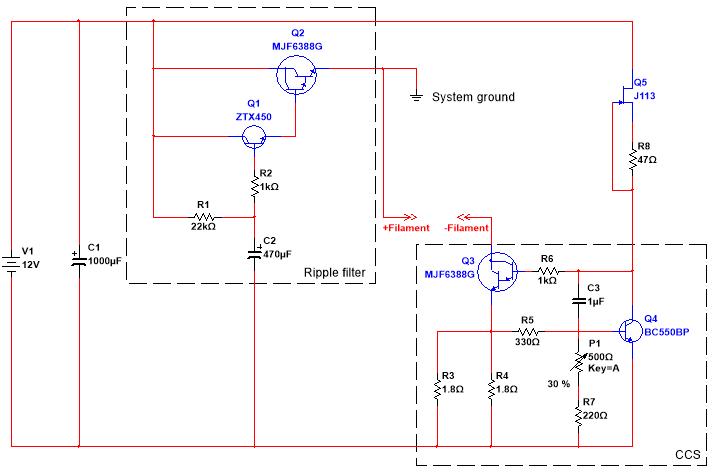 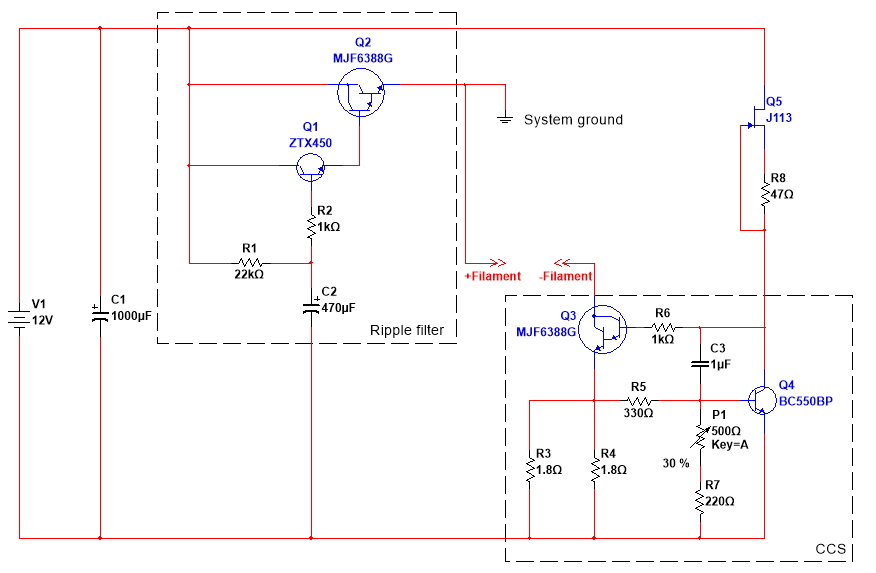 Above is the final schematic I’ve build. Now positive side is not a gyrator or CCS, but simple capacitance multiplier and it’s only function is to lower the ripple voltage. It has around 40dB of PSSR at audio frequencies. So you still need a fairly quiet PSU, but nothing spectacular. All the usual DHT heater PSU wisdom do apply here also – low capacitance split-bobbin transformers, soft-recovery rectifier diodes and common mode chokes if you have any RF problems. But the influence on sound by these components are now so minor that they are really not critical. Lower CCS is very band limited and it’s impedance only depend on transistor hFE. With TIP122 I measured something like 180Ω. Not bad for essentially single transistor. OK, two in one. It starts rising at mains frequencies to help with any mains ripple even further, but doesn’t influence the sound. You can experiment and increase C3 even further, or shunt Q4 emitter-collector with a large capacitor and eliminate any feedback at all. Also feel free to try grounding the negative side of the regulator (CCS), but I always get back to positive as it sounds much much better. That CCS does shield filament current more effectively this way. Whatever you do, always remember to listen to what you build! And never trust no one blindly. Happy tinkering 🙂

Back to TUBES
GO TO DHT AMP