After having couple direct drive turntables over years I felt real cravings for something new. Something exciting! So I couldn’t think of anything better then delving into somewhat controversial type of idler-wheel tables. Now I should explain my self what sort of controversy I’m talking about here, because there always is one in audio.

You see, on paper it’s more or less inferior concept. First of all it’s the oldest way to spin records. Up until 1970’s idler-well was the most common type of drive, except maybe for some hi-end models. But even then, companies like Lenco, Gerrard and Dual positioned their hi end tables based on idler-wheel drive. Then, it has inferior tech specs when compered to belt or direct drives. For the most part at least. I’m talking rumble here, which is unavoidable considering construction, which implies direct contact of a platter to the simple synchronous motor, trough yet another moving part – rubber idler-wheel.   And for the last buzz kill we have a price tag, which is often hefty for a well known models. So this begs a question, why they are so well regarded and sought after to this day ?

There isn’t a lot of it when picking well engineered idler table for a reasonable price. That’s a reality that we face each day in this information age. When word gets out on blogs and forums that such a model from such a brand sounds good, you get prices sky rocketing for that table almost immediately . I saw it happening many times with Lenco’s L-75 then L-78, Gerrard’s 301, 401 and the list goes on. There was time when you could easily pick these tables on eBay or barn sales for 50 bucks all day long… well, not anymore! Now they’re competing in a same price range with a brand new offerings from manufacturers like Project and Rega.

This sad situation led me to my research on what’s there left relatively unnoticed  in market and DUAL’s were there as potential candidates. Their top end models like CS5000 or CS701 gets a lot of attention, but their idler tables seems to slip trough the radars more or less unnoticed. At least it seems so looking at the prices and I started to wondering why?

So What’s There Idling ?

And so I went browsing service manuals and forums for real life photos of DUAL’s idler tables, and what I found was a pleasant surprise. From technical stand point they are all very similar to Gerrard and etc. vertical driving system. We have a vertically mounted synchronous motor with conical motor pulley, which is coupled to a rubber wheel that is spinning the platter when engaged.

Overall build quality was corresponding quite well to the era. Solid looking base, fine four poles motors and almost no plastic parts. Except cam wheel, which is kinda ok for friction purposes. One word comes to mind when looking to these tables – overengineering! And that’s a very pleasant word which is banned these days in engineering circles for mass consumption products. 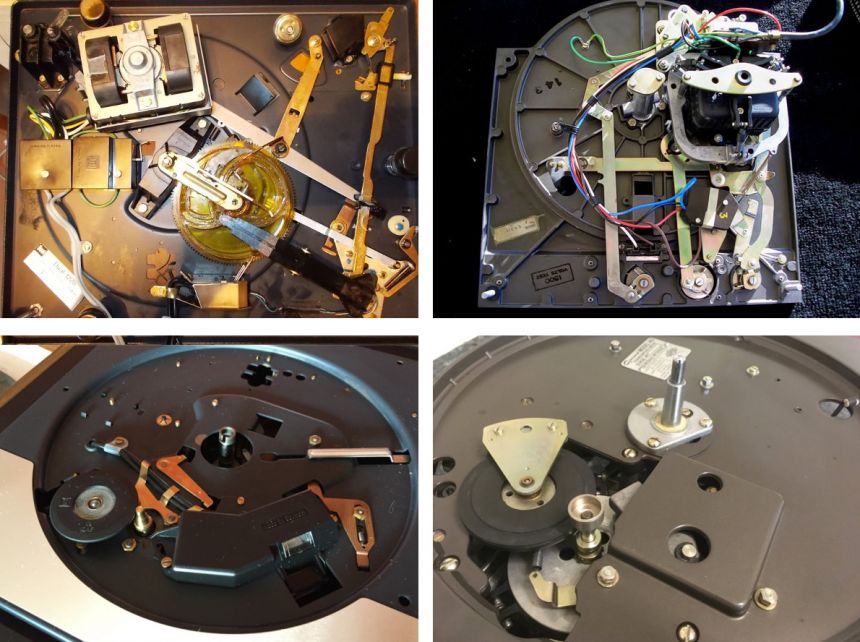 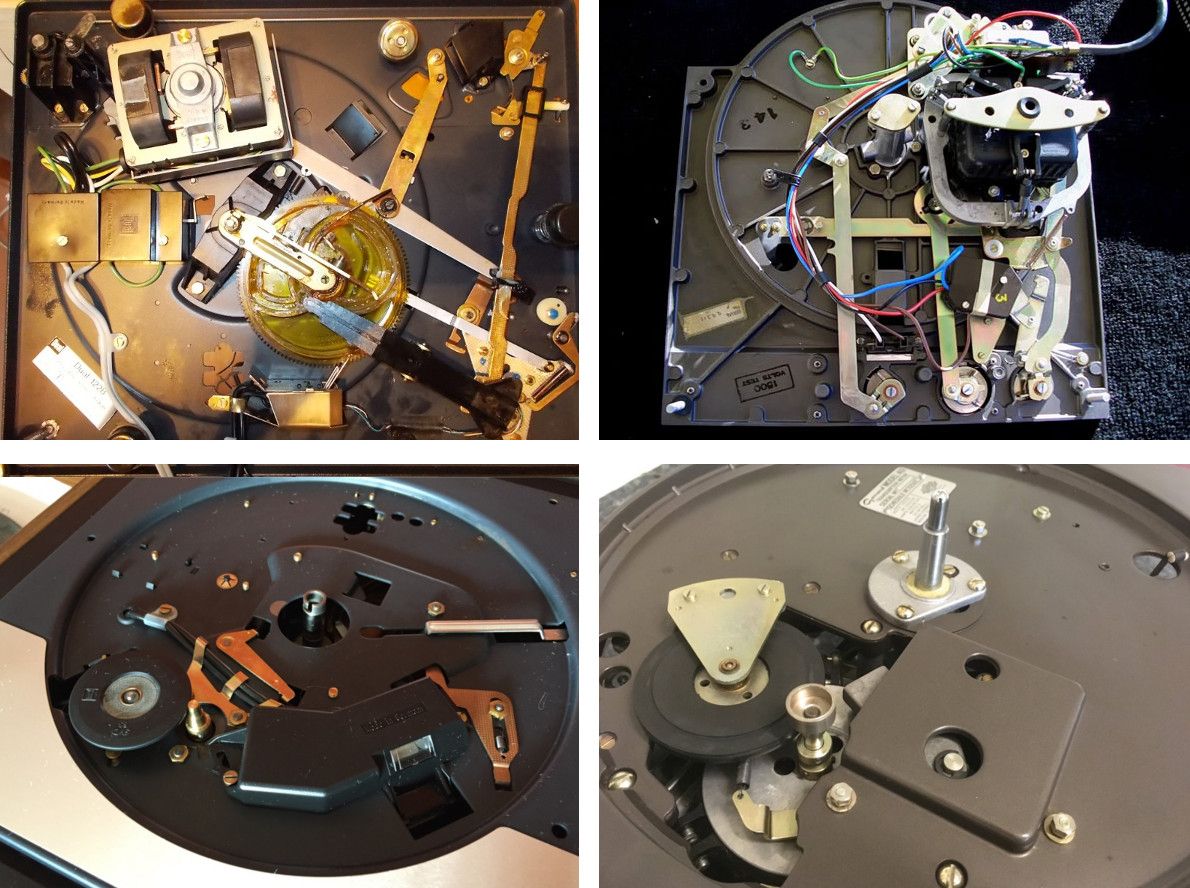 Sure thing, when putted side by side with reference tables such as Garrard 403, we can see some obvious differences:

But that’s about all she wrote really. And I got a feeling that not properly decoupling motor unit on DUAL is the only pitfall which is bound to impact overall performance noticeably.

Time to Pick The Underdog 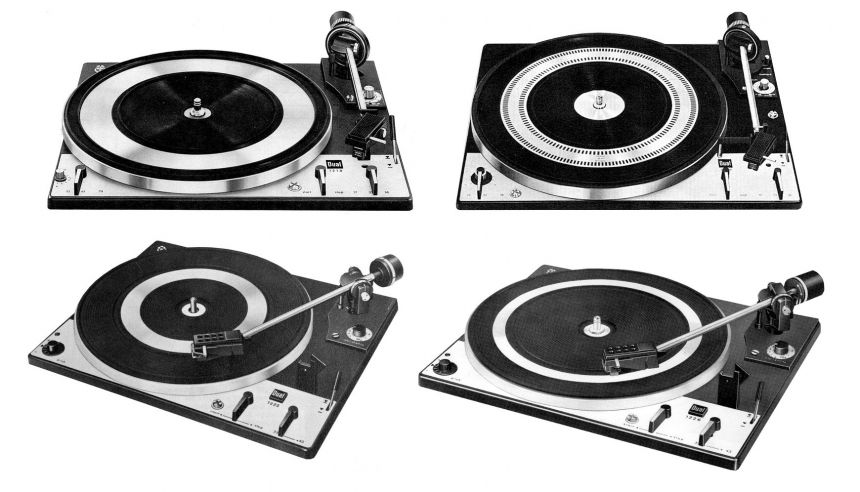 When comparing the three, DUAL 1218 has better 4 point gimbal tonearm assembly and can play 78 speed records. Also motors on 1225 and 1226 are asynchronous, whereas 1218 has synchronous one. Not getting in too much technical details, I will say that synchronous motor has more constant speed and is less load dependent. Within it’s limits that is. Construction of both DUAL motors are identical, except that synchronous rotor has magnetic ring, which “locks” it to magnetic field of a stator. This field is rotating at constant speed and synchronously with mains voltage frequency. So rotor runs synchronously up to some torque and then stops, when angle between stator field and rotor reaches 90°. Asynchronous motor, on other hand, has constant slippage from stator field. It starts slowing down when armature reaches saturation. But we are getting nitpicking here on technical details so I better leave it for separate article. Other than that, 1218 has no major differences from 1225  and 1226.

And We Have a Winner !

Yes, you guest it, it’s 1218. You get slightly reduced copy of 1219 for just a fraction of the price. Of course, if you can scratch the cash and can’t live with 270mm platter and shorter arm, then go a head and buy 1219. It’s wonderful table by all means, just slightly worse bang for the buck. So I had my eye on 1218 for some time and was able to pick one in a  yard sale for a reasonable price. 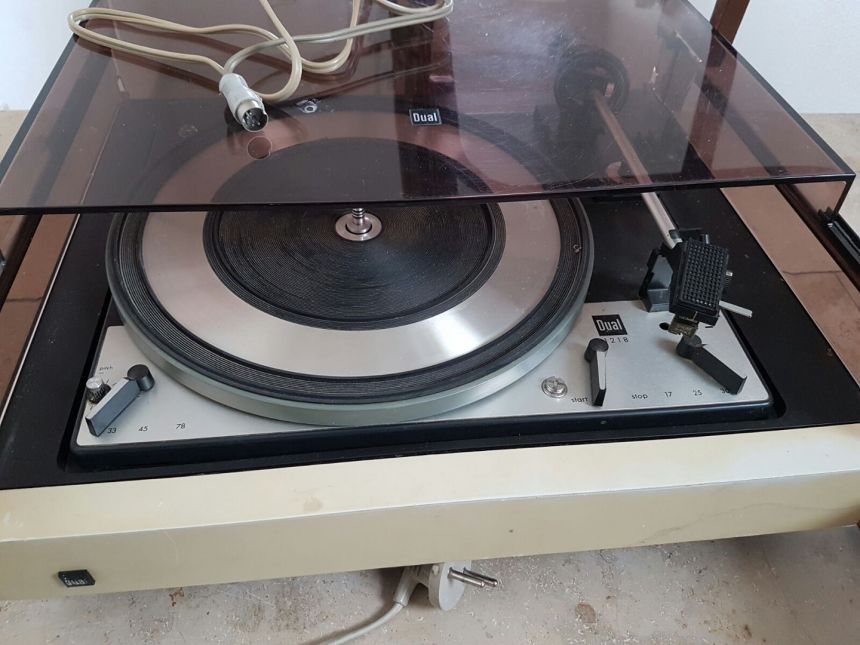 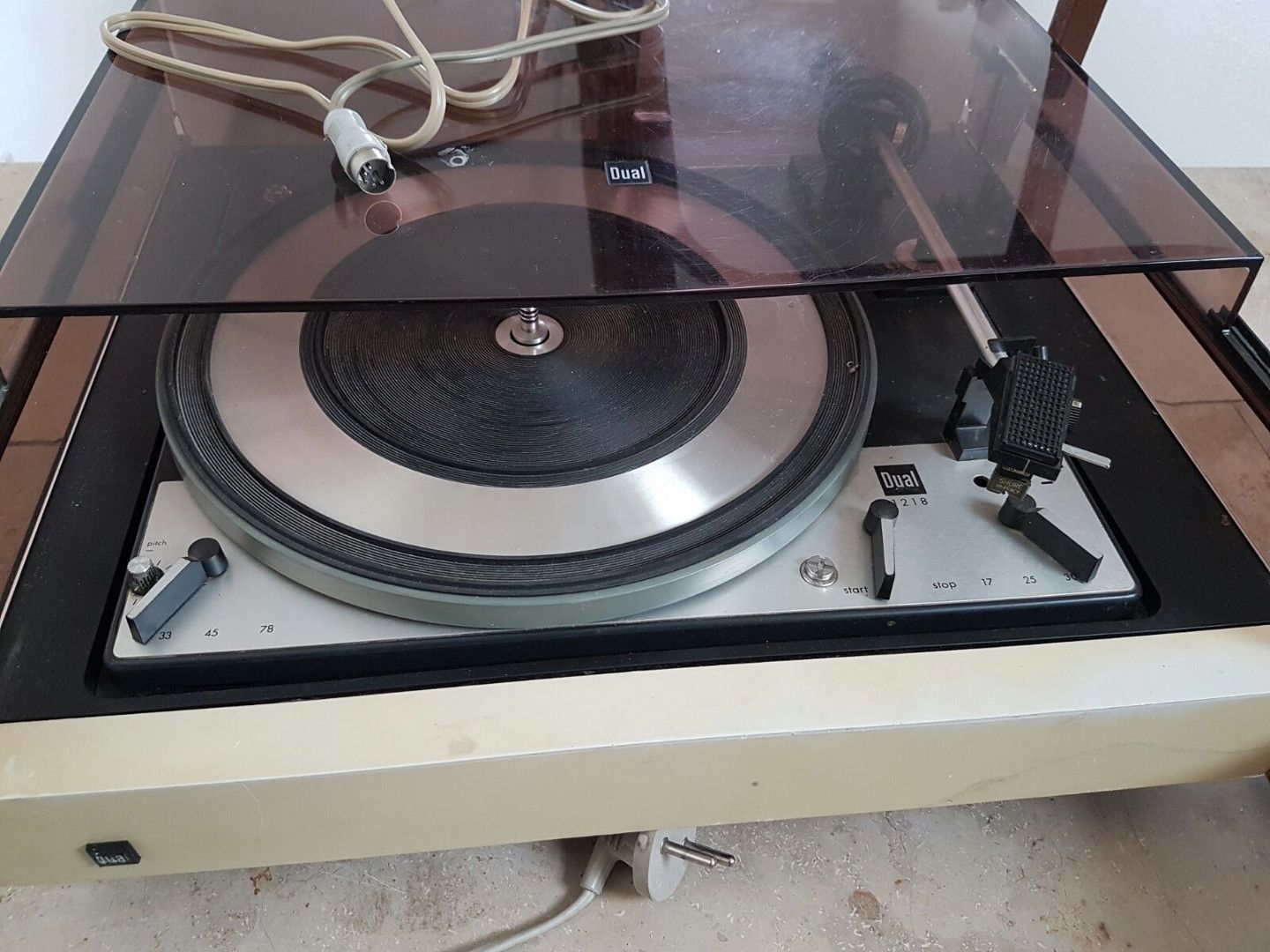 From a get go it was obvious that it will need a lot of attention and some work. First of all it came with obsolete DIN plug which needs to be replaced to a modern RCA + ground system. Overall cosmetic condition was fair enough, no obviously broken parts, scratched paint or other show stoppers. Although paint or plastic laminate on wooden body was in poor condition. It was discolored quite profoundly. I wonder was it ABS laminate with Bromide ? That thing famously turns from white to yellow over long exposure to UV light. You can see this happening with old PC’s and whatnot.   Plugging it in mains and pushing all possible switches didn’t produce any reaction whatsoever. It was dead as doornail. Nothing. Nada. And so the restoration begins.

The Proof is in the Pudding

So it’s time to put some records and witness the full glory of idler sound. But first, I should remind you what was the main sale pitch for these tables. It’s improved dynamics! I will admit that I was always quite skeptical regarding these claims. It’s just that I was really having trouble wrapping my technically spoiled mind around such statements. 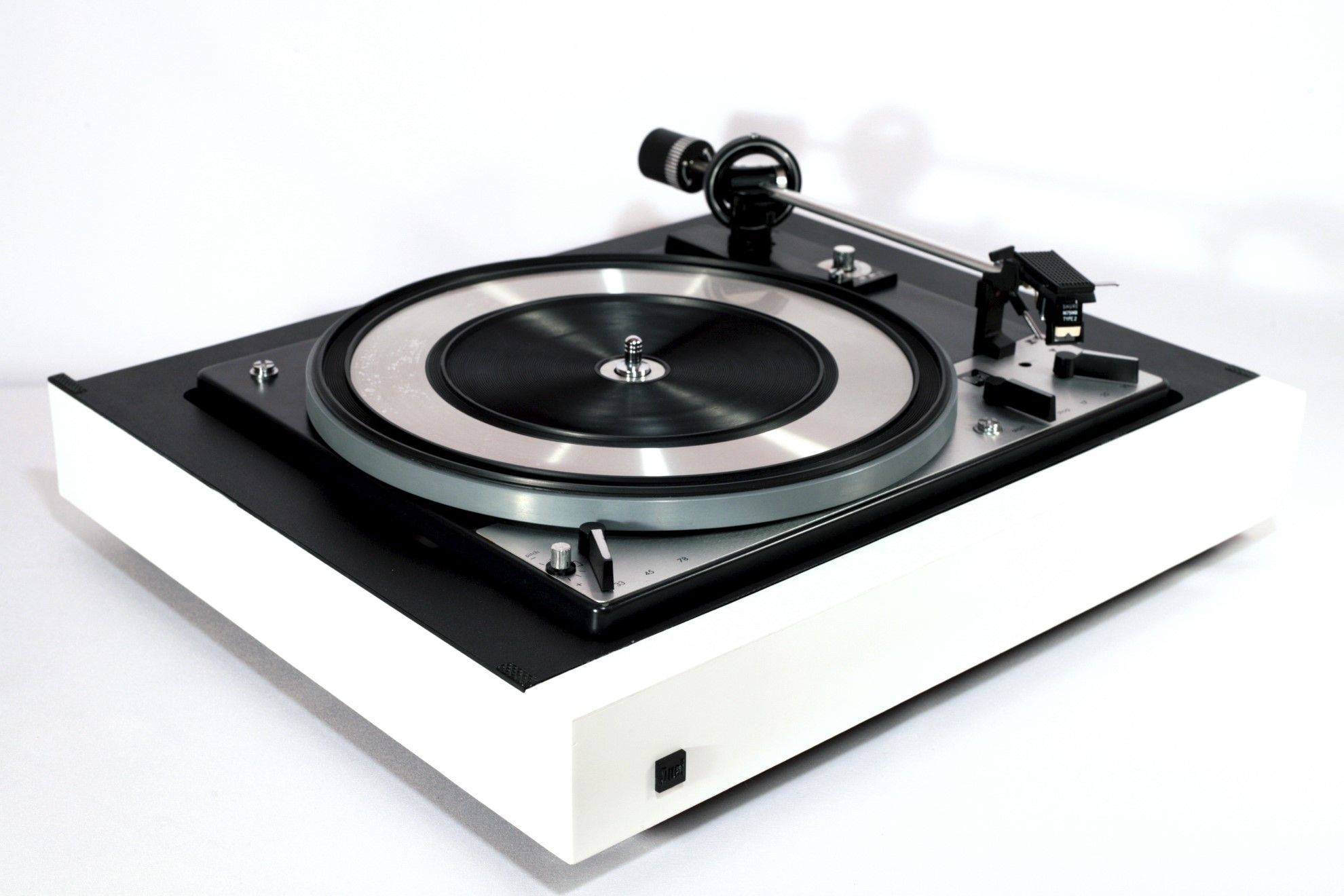 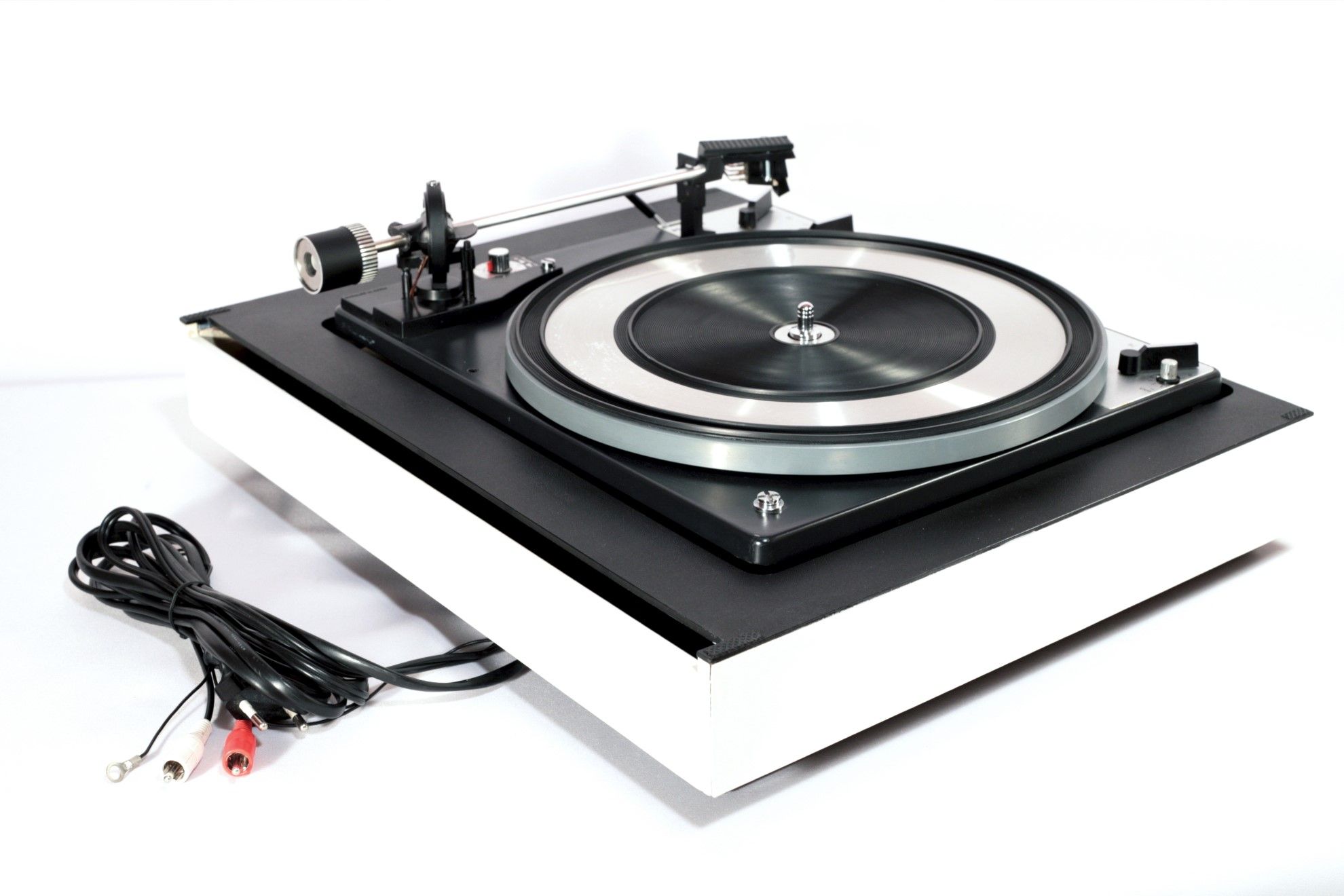 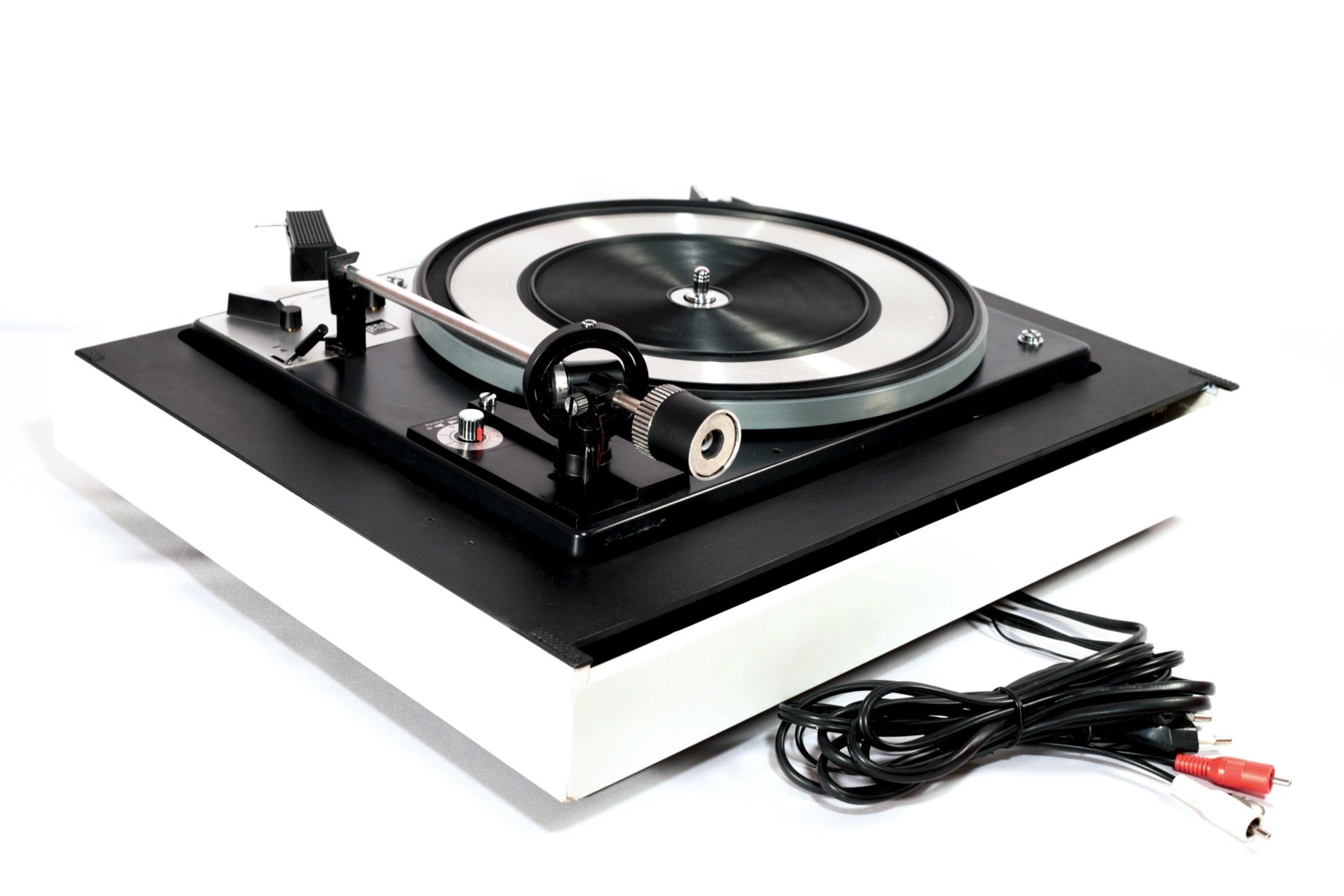 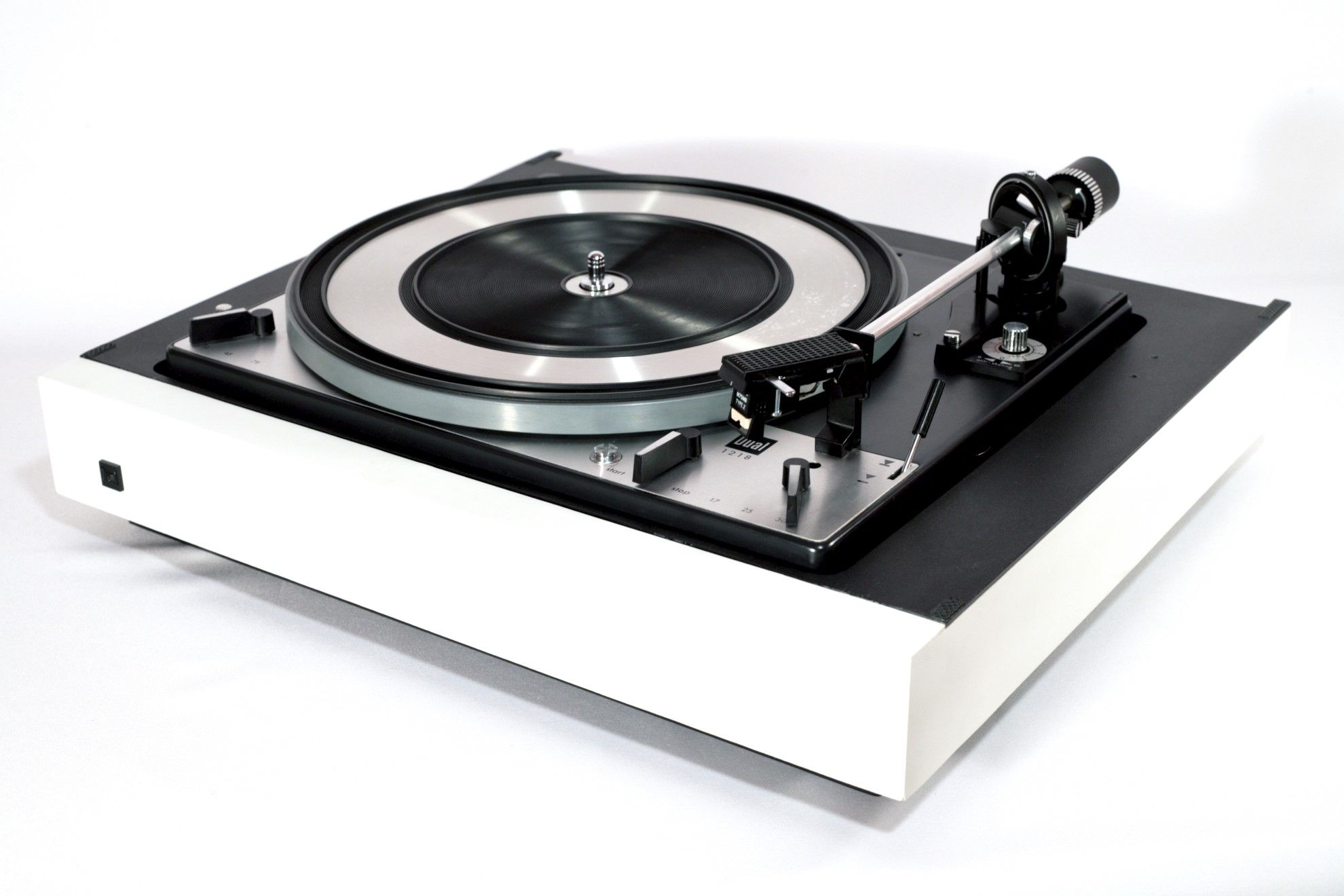 I mean, just imagine for a minute that this tiny needle tip is flying through the record groove and suddenly loud music passage begins. Groove modulation increases and needle starts moving around trying to track it. We are in microscopic dimensions here and you have to use electronic microscope to see anything really.

And now, suddenly this negligible change in needle friction can some how make impact on heavy platter, with all of his motion momentum ? I mean, really ? But when you counter this action by using high torque motor to spin platter and couple it through massive reducer (idler-well), suddenly miracle happens! And you can hear this divine intervention on your speakers! In a mean time your brains will be hopelessly trying to figure out what a hell has happened, and they will interpret it as improved dynamics, faster attack  and better rhythmics ? Come on…

Warning – formulas ahead ! Skip if you are allergic…

For more technically inclined I can put numbers on those figures to better illustrate my point. Lets say elliptical stylus has contact surface of 25 μm2  and it creates frictional force of  0.001N. Now average platter, with diameter of 310mm, weighting 2.2 kg and freewheeling at 33rpm, has inertia of 0.026kg·m2 . To stop it in 1 second, you’d have to apply frictional torque T of :

If we assume that we are braking in a middle of a record, 9cm from center, this would translate to force F of :

And even if we are very generous and assume that stylus frictional force varies in a range of  10%, which translates to 0.0001N,  that’s still a forces ratio of 1 to 10000 ! You wonder how this 0.0001N variation influences speed ? Again, lets be generous and apply this force for 1 second and work our way backwards:

But you know what’s the funny part ? To fully counter this speed change of 0.03%, table motor drive must provide same minuscule 0.0001N of torque. Well, you get the idea now…

I was really in my anti-snake-oil-full-skeptical mode when listening to this newly restored table, and boy did I was proven wrong. Not for the first time, mind you, and surely not for the last one. That’s the fun part of these adventures. To be surprised and proven wrong. This was one of those times that still further changed my perception on human brain-ear abilities and how little did we understand in psycho-acoustics. I will not try to describe you how it sounds, because it’s futile exercise. What I hear is not what you may hear, so I could write ten more paragraphs and it won’t make any difference. I will just say that it delivers all that it promises. Maybe Shure’s M75MB isn’t my cup of tea, and that plastic head-shell is sketchy, but my trusty AT95E sings beautifully in this light arm.

And so my quite long lasting relationship with 1218 started and the contagious idler bug was caught. Lots of good time replaying all my record collection and finding new things that I didn’t noticed before.

Go Back to Vynil
Read more about Measurements